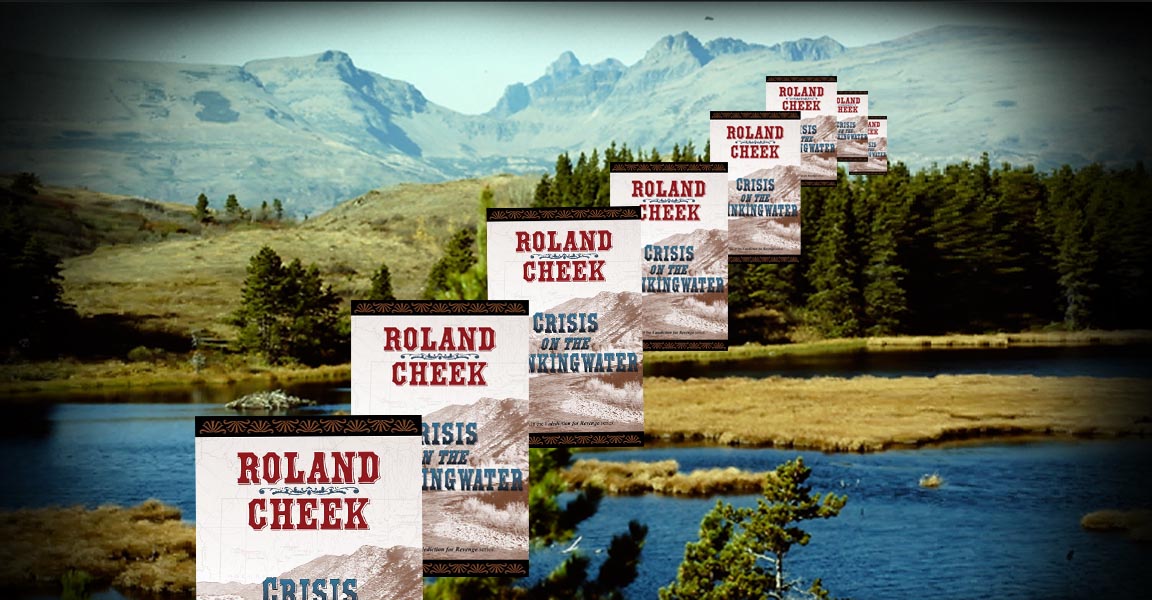 West of the Johnson County War, and pre-dating it by a half-dozen years, was another bitter cattleman / homesteader conflict. Set amid the wild and beautiful land Wild Bill Cody later made socially palatable by changing its river's name from the Stinkingwater to the Shoshone, Jethro Spring again seeks fortune's breeze and reaps fury's whirlwind. This time, however, the fugitive with a murder charge on his head comes into conflict with evil for his own behalf, not in defense of helpless others. Seeking only peace and isolation, Jethro Spring, known here by the alias Jacob Weatherby, stirs Wyoming cattlemen's passions until both justice and the embattled homesteader's psychic survival comes into play. It's reason for the Crisis On the Stinkingwater

Stan Lynde, creator of the acclaimed Rick O'Shay cartoon strip and several great Western novels, had this to say of Roland's first Western:
Echoes of Vengeance is a well-imagined and compelling read. From Montana's high plains to the Natchez docks, from the cowtowns of Texas to the Oregon coast, Roland Cheek paints his young protagonist's odyssey with a deft hand, portraying the values of courage, principle, and friendship on a canvas as broad as America itself.

Midwest Book Review:
Echoes Of Vengeance by Roland Cheek is a tautly written novel of Jethro Spring, a young man who must suffer the consequences of dealing with the murderer of his parents. He's forced to travel through the Northern Rockies wilds and the Cherokee Strip, among other locales of natural beauty and splendor. Bounty hunters pursue him through Texas, until he must reach a final reckoning in this varied, flavorful and solidly written western saga.

The fifth in the "Valediction for Revenge" series finds Jethro Spring still on the run from a false charge of murder, in the valley of Stinkingwater River, where he files a homestead claim on a remote piece of land claimed by a greedy and powerful rancher. Jethro only wants to build his cabin and live quietly in peace; he doesn't want a confrontation with Ellis Burroughs. On the other hand, Jethro has no intention of being run off his land. His example leads other homesteaders to resist Burroughs, risking their lives to do so. Jethro partners with and old mountain man, Sam Buttercut, who knew Jethro's father and aims to help the son in his fight to keep his homestead. Lillian Mathers, the fiancee of Ellis Burroughs, and her father, Angus, join with Jethro and Sam to defeat the domineering rancher. Much of the book is narrated by Sam

Buttercut, one of Cheek's most likeable and humorous characters, and it is Sam who passes judgment on Jethro's last action against Burroughs. In terms of the ending, Crisis on the Stinkingwater is Cheek's darkest book. It is also the most realistic. The portrayal of the depth of hatred engendered by the bitter conflict between rancher and homesteader chills the reader, as does the character of Levi Bunting, Burroughs's foreman. A villain as evil as Bunting is not often realistic, but seems made out of cardboard and painted black. Cheek avoids that trap. As black as Bunting's character is, he's still believable. All in all, Cheek has written another Western that is filled with suspense and unexpected consequences.

I rid up ol' Clark's Fork o' the Yellowstone that spring of '83, an' looked around. T'warn't the first time I was thar and I hoped it wouldn't be the last. But a coon my age has to think it likely he'll face the Reaper some day, what with injins and varmints 'round most every corner.

The reason I come, so I told m'self, was t'look over the fairest place on God's green earth for at least one more time. Sunlight Basin hadn't changed much since the last time I was there a-workin' for Morgan back in '80. But Sunlight Basin warn't whar I was goin'. The Southfork of the Stinkin'water was.

Morgan hisself was a okay cowboy if you liked the breed. He'd drove cows into Three Forks buffler country some years afore, and I hitched up one winter I was hungry. Seems like he'd had some injin trouble, Morgan had, and was lookin' for somebody could help. Since I was long on time and short on backstrap, I allowed as I might be the Angel Gabriel a-sent to deliver old Morgan from the devil's hand.

Bein' beset by devils he called Bannocks, old Morgan jumped at m'offer and we hit a right smart agreement--if I could keep injins from his cows and his topknot, Morgan would supply all my worldly wants.

Now many a run-down ol' mountain stomper ain't a-lookin' for nothin' more, so I signed on with a holler and a handshake and grubstaked out o' Morgan's camp for three winters afore he tooked my advice and moved to the forks of the Stinkin'water whar I knowed the grass was stirrup-deep and the water fit for drinkin' if you boiled it first.

Life couldn't a-been better for this ol' rascal. Then Morgan turned out to be a pot-likker and sold his outfit to a pansy-bottomed eastern pilgrim what I'd heered existed, but never knowed the kind. Bein' as me'n Pansy Bottom didn't hit it off real loud, I got to thinkin' about other places I been. So I just up and rode away.

I ate buffler hump in the Bearpaws, elk rib in the Crazies, dog meat in Paiute tipis, and dog salmon on the Lochsa. I looked most of it over purty good; up by the big blue lake o' the Kalispels and down into Salt Lake country, what used to be a fine place to winter 'til it got filled up with God-rotted Mormons. I was over to whar the Yellowstone dumps into the big river and I was down to Henry's Fork o' the Snake. It was up in the Bitterroot country in Montana when I got to thinkin' about the purtiest place God ever made, and I figgered three years without eyeballin' the Stinkin'water was longer than long enough.

I first hit the Stinkin'water back in the winter o' '40. I was a green-eared young'un of twenty-one, fresh from a North Caroliny dog patch, and Richard was a plumb keen mountain wizard with the know-how of a timber lobo a-hind him. For all my green-as-grass and for all his wild-place smarts, Richard was one o' the swellest gents I never did meet. He had the patience of a wild critter and spoke so soft a man had to lean close to listen in on gab th'owed his way. He moved like a cat and was plumb keen with any kind o' weapon come to hand. Most of all, howsomever, Richard just never made mistakes and he was some punkin' for a young'un to learn from.

Other fellers called him Dick, but I never did. Way that come to pass was plumb fancy. Him and me, we'd been out for a couple o' days when I asked him his name. He says "Dick."