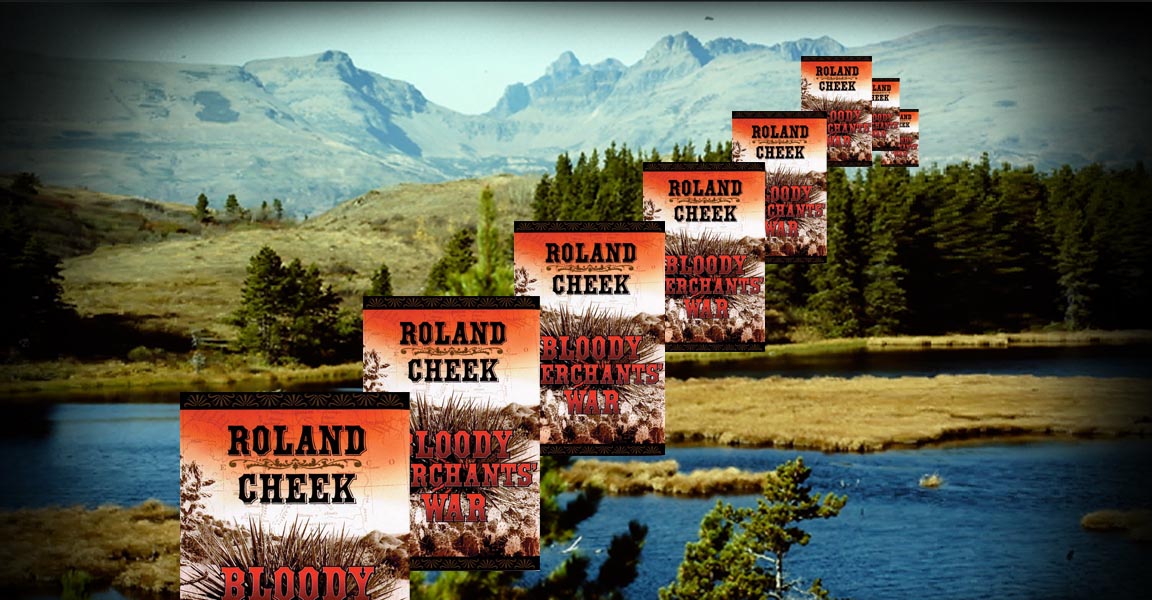 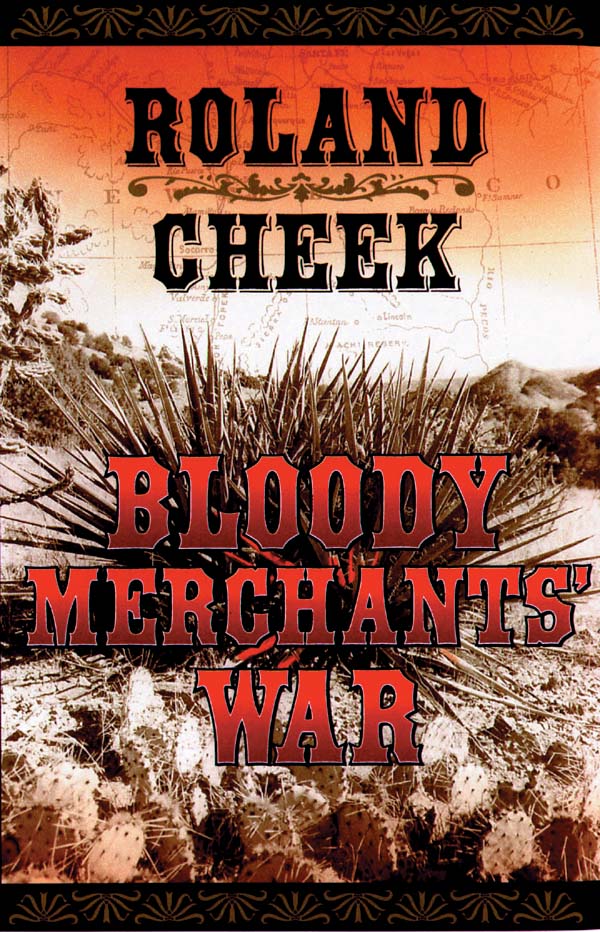 Poor farmers and ranchers gripped in bondage by an iron triangle of crooked merchants, an oppressive military regime, and a corrupt Territorial government. Lincoln County New Mexico was not a good place for a fugitive wanting only to blend peacefully, and without attention into his surroundings. Instead, Jethro is ambushed by events beyond his control; those events spiral into a conflict without clear distinctions between good and evil, right or wrong, friend or enemy. Eventually the young fugitive chooses, but did he make the right choice? With Billy the Kid? For John Chisum? It was indeed a Bloody Merchants' War

Jethro Spring, a mixed-blood progeny of a mountain man and his Blackfeet wife, offers up as much adventure as a fan of western storytelling can handle

Bloody Merchants' War is the second book in a series that began with the critically acclaimed
Echoes of Vengeance. Cheek's novel follows Spring -- a fugitive wanted for killing an army officer who murdered his parents -- as he finds himself amidst a bewildering set of circumstances involving corruption, deception and evil.

" . . . Roland Cheek paints his young protagonist's odyssey with a deft hand, portraying the values of courage, prinicple, and friendship on a canvas as broad as America itself." - Stan Lynde, author of Vigilante Moon.

In Book Two of the Valediction for Revenge series, Jethro Spring is a fugitive running from the law for killing the U.S. Army major responsible for killing his folks. He has been on the run for sometime, once in the Upper Missouri, then from the Cherokee Strip to Colorado. But now he is in Lincoln County, New Mexico, where poor farmers and ranchers are at the mercy of crooked merchants, the military, and a corrupt territorial government run by something called the Santa Fe Ring. Jethro is caught up in events and must figure out the good guys from the bad guys -- or is there any difference? He has to choose sides. There are no neutral zones to hide in and wait out the violence. But was the side of Billy the Kid the right side? And just where does John Chisum fit in?

A fascinating look at the Lincoln County War from another perspective, with highly charged dialog that will shock you like a live wire, and genuinely living characters. There is nothing two-dimensional about the folks in this book.

Cheek is an accomplished writer and storyteller. His new book, Bloody Merchants' War, is the second in a six-part series..."

The West is something that Montana author Roland Cheek knows well from years as a wilderness guide and decades of writing newspaper columns and magazine articles.

He's also notched some successes with his nonfiction and six books about the West of today and his earlier tale of the Old West, "Echoes of Vengeance."

Now he builds on Jethro Spring, his character introduced in "Vengeance," for a sequel, "Bloody Merchants' War."

The novels are part of a series that Cheek calls "Valediction for Revenge," They track Spring as he leads the life of a fugitive after slaying an Army major who led a raid on the Musselshell River where Spring's parents were butchered. Along with an entire unsuspecting Indian village.

Spring rides his "gaunt, sweat-streaked mare" out of the Capitan Mountains into southeastern New Mexico in 1877 and into that common theme for old Westerns -- cattle wars.

But Cheek takes the struggle beyond the usual disputes over land, animals and political power, beyond the race and class divisions that leave Spring caught between the Native American blood of his mother and the so-called civilized world of his white father. While all these elements drive action in the novel, what sets the book apart is the struggle for men's souls.

Spring may have killed a man in the past, but, throughout "Bloody Merchants' War," he is the voice of reason, the one appealing to others to not exact vengeance outside the law.

Simple survival is a challenge on the hard-scrabble range -- for both men and animals. The battle for Army and reservation supply contracts and the retail and political control of a town only add to the simmering stew

It takes little for tempers to boil over and gunfire to erupt.

Spring steps into the middle of the fire almost immediately. His skills in thwarting an attack on a home make him sought after by both sides. But he's unwilling to sell himself as a gunhand to the highest bidder.

Instead, he hires on for far less pay at the ranch of one of the leading mercantilers. He hones his ranch skills, but his past as a prizefighter and his fast gunhand are repeatedly of more value.

Cheek takes the tale beyond the usual running gunfight to look at the corruption rampant in early government in the West and the problems of trying to eliminate the problems in lands far from Washington, D.C.

The fear of standing down local bullies twisting justice to their own ends is evident as higher-up government officials wash their hands of indictments or return court rulings that may recognize a wrong but mete out no punishment.

Cheek fleshes out his characters so that the reader finds both good and evil at war inside many of the individuals. Even Spring struggles with what actions to take.

The story includes well-known Western icons, such as the Chisum family, famed for their huge cattle operations and long cattle drives, and William Bonney, better known as the future outlaw "Billy the Kid."

And Montana readers will appreciate Cheek's references to their native state when Spring's reminiscing goes beyond the brutal assault in the Indian Wars.

The author has created an appealing lead character who's morally and physically strong in a world where choices often come under a hail of bullets. It's a fresh approach on a well-worn trail and worth following for novel No. 3.

They came from the Capitans, a gaunt, sweat-streaked sorrel mare and her grimy rider. Topping a low ridge, the man gave the mare her head.

Without pausing, the horse plunged down the rock-strewn foreslope, squatting on her haunches like a dog sitting on a porch stoop, sliding amid a cloud of pea gravel and dust until she leveled out above a sandstone bluff. The rider checked her there and sat staring at a sluggish stream and the scattering of buildings shimmering through heat waves beyond.

The mare was so fine-lined that few owners would've ridden her into such an unforgiving land as the desert at their backs. The man straddled a hand-tooled Visalia saddle that, from its weathered appearance, had seen misuse.

The man's clothing was also badly worn: a faded blue-cotton shirt ripped at an elbow, patched canvas trousers, a high-crowned hat so battered and dusty its original shape and color were hardly decipherable. Worn, moccasin-style boots completed the ensemble.

Like the once expensive California-style saddle and the well-bred mare, a lined face beneath the hat's floppy brim hardly squared with the raven hair of youth. Nor did the eyes: startling gray, set deep in a face shaded darker than the well-oiled leather holster hanging midway down his thigh. The rider unconsciously slapped dust from that holster, then wiped the darkened walnut buttplates of a polished and oiled Colt revolver until the worn grip reflected a late afternoon sun.

A bead of sweat trickled from the hatband and coursed down his grimy face as the man slid a scarred Winchester carbine from its scabbard and checked the action and magazine with a twist of his wrist. Satisfied, he slapped the lever shut, then thrust the rifle back beneath his leg, clucking to the mare, reining her to a break in the bluff and down to the water flowing between hill and hamlet.

A chicken squawked and a dog barked from farther upriver as the mare quenched her thirst. When she lifted her head, the man clucked and pointed her up the far bank to the row of adobe houses beyond.

Two vaqueros leaned against a building on the left, staring vacantly at the newcomer. A hand-lettered sign over their heads read:

Above a door on the building's far end was another hand-lettered sign:

No music or laughter drifted from within.

Back from Montano's store stood a larger one-story stone building. Above its double doors hung a better-crafted sign: