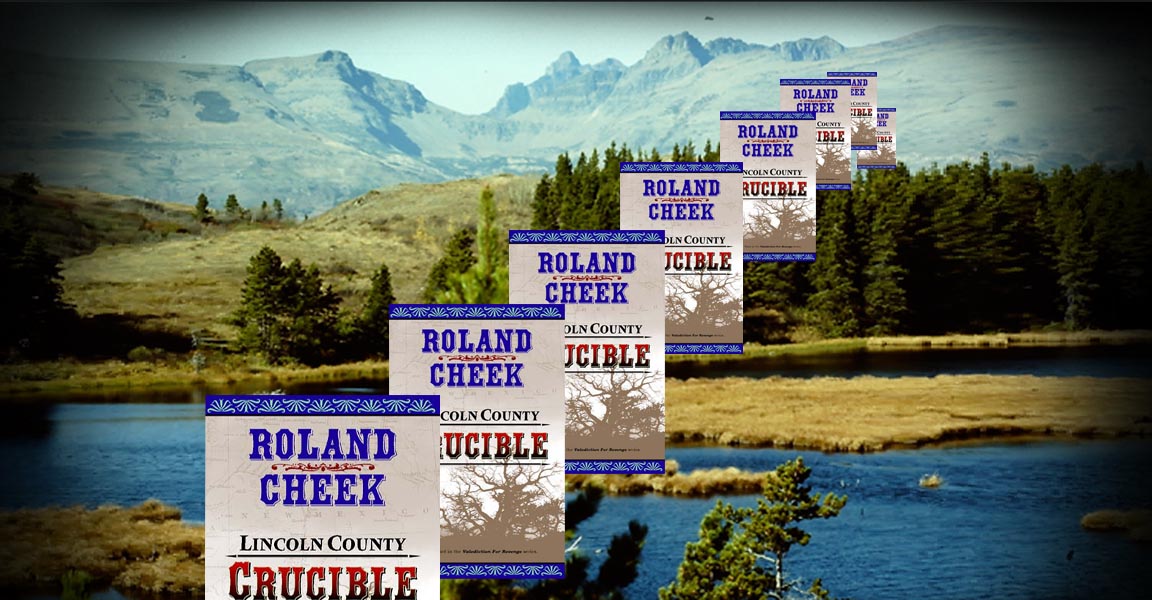 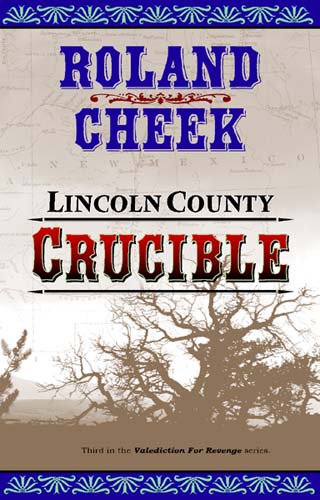 This story opens after the terrible Lincoln gun battle where Alexander McSween and many of his partisans perish. The notorious "Santa Fe Ring," a crooked triumvirate composed of elements of the United States Army, Territorial government, and extortionistic merchants are in near-total control of Southeastern New Mexico. Young Jethro is undecided about staying in the country or riding into the sunset. His head tells him a man with a price on his own head should drift on. But what of the widowed Susan McSween? Or of his friend, Billy the Kid? Or of the starving Mescalero Apaches? Or of the poor Anglo and Mexican farmers strangling from the "Ring's" bloody yoke? It was Jethro Spring's Lincoln County Crucible

This is the continuing saga of Jethro Spring, a man born of an Indian mother and a mountain man father, who passes through red and white worlds without feeling at ease in either.

In New Mexico, he is drawn into the Lincoln County War, one of the bloodiest chapters in Western history

It was a power struggle between two factions contending for the economic control of southeastern New Mexico.

Their association with a close knit cadre of territorial officials and military officers -- known as the "Sante Fe Ring" (the real power in the territory) -- allowed Dolan-Riley to control Lincoln County.

John Tunstall, rancher and son of a wealthy English merchant, conceived the idea of a partnership with Alexander McSween to establish a business to compete with Dolan-Riley.

At stake were the rich military and Indian Reservation beef contracts.

Jethro Spring is drawn into the crucible of violence as the war breaks out in Lincoln County where he is acquainted with most of the gunman on both sides.

As the tide begins to turn with a new Territorial administration, Jethro befriends the new governor, Lew Wallace, and becomes his confidant and investigator.

Still he can't forget his past friendship with Billy the Kid and others who use him to further their own interests.

As the trouble winds down, Jethro eventually becomes estranged from the unforgiving land and people without peace.

Roland Cheek has used the history of the Lincoln County War and gives it a fresh twist. The dialogue is extremely well-done and the action scenes are alive with excitement.

No doubt we will read more of the adventures of Jethro Sping.

The third volume in the Valediction for Revenge series opens directly after the Lincoln shootout leaves Lawyer McSween and several of his followers dead. Those who remain must decide whether to come back another day to fight the Dolan-Riley gang, or forget about obtaining revenge for young John Tunstall and ride away from Lincoln County. Jethro Spring, the young mixed blood with an Indian mother and a white father, has about decided to ride on, the Lincoln County War having no hold on him. But can he really desert Susan McSween, Billy the Kid, for whom he still feels some affection, and the poor Mexican and white farmers and ranchers, whose economic well-being is threatened by the Santa Fe Ring? Lincoln County is completely lawless. The President sends in Lew Wallace as the new Territorial Governor with orders to clean up Lincoln County. Spring becomes Wallace's investigator and tries to convince the governor to give Billy the Kid a pardon.

Despite Wallace's good intentions the head of the Santa Fe Ring, Thomas B. Catron, is permitted to remain as New Mexico's Attorney General. Catron takes over the Dolan-Riley store and reinstates the control the Ring had in Lincoln County. Jethro is arrested by the corrupt sheriff, George Pippin, who is in Catron's pocket. Pippen is supported by a detachment of troops from Fort Stanton. To Lincoln County residents the bad times are back, and one can feel the hatred in the street. Afraid for his life Sheriff Pippen resigns, and with him goes the last pretense of law and order in Lincoln County. Although the residents feel the worst is over with the resignation of Pippin and the defeat of John Selman's outlaw gang, Jethro feels Lincoln is poised to explode.

This fictional recounting of the aftermath of the Lincoln County War is by necessity filled with a multitude of characters, but Cheek succeeds in so clearly describing the various illegal maneuvers of the many participants on both sides of the conflict, that the reader is able to follow the action. By choosing the years immediately following the Lincoln War, Cheek is challenged to render the complexities of the political, legal, and commercial aspects of situation in Lincoln understandable to the average reader.

When Jethro Spring's eyes fluttered open, the Indian was sitting cross-legged by the long-dead campfire, apparently dozing. From the distance of fifty feet, Jethro could make out the raised welts of long-ago knife and bullet scars peeking from beneath folded arms and resting chin. Even the jagged white line on one cheek caught the early morning sun. The Indian was, Jethro thought, the meanest-looking human on earth.

He had known he could not remain long among these high mountains without being discovered by the Mescaleros. So the gray-eyed man made a game of it, moving by night, carefully wiping out tracks, using seldom-traveled trails, building a fire only when necessary. Each time he'd set up his meager camp in a defensible place, then retreat to sleep in a commanding niche where he could survey the camp and its approaches. This time, he'd even taken time to place tiny warning devices upon those approaches--trip ropes, a bent sapling, a balanced rock or pebble. Apparently none had worked.

Jethro glanced at his two peacefully grazing horses, content on their picket ropes. He slowly swung his head to gaze up at the cloudless sky and saw it would be another scorcher of a day, even in these forested mountains. Sunlight kissed the highest Sacramentos to the west. It also kissed his perch and the slumbering Apache.

As if on cue, the Indian raised his head and gazed at the sunlit peaks. Then he swung to stare at the sprawled figure on the ledge above.